Complaint:  Prior to surgery client had been unable to play golf for years and could not walk more than a quarter mile due to pain and swelling of left knee, and at times ankle and hip.

Client received Physical Therapy one half hour every day starting 6/24/2016 for first week, twice a week for the second week, and three times for third week. PT consisted of a series of exercises for strength and range of motion. Patient approved for out-patient physical therapy by the fourth week.

Myofascial and Lymphatic techniques were applied every day, up to three times a day, as well as assistance with ambulatory exercise inside and outside, each day increasing walks a little longer.

Kinesio Tape was applied in a Basket Weave pattern on 6/28/2016 to the ankle and lower leg, and the swelling subsided in two days, and was reduced by l/3 by 7/l. “I” strip was applied above knee 7/3/2016 across quads. The purpose was to address the client’s inability to engage in knee exercises and walking. 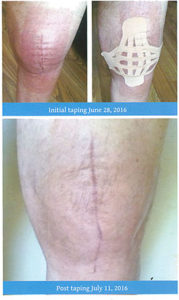 I re-taped slightly higher and with less stretch the next day. Results allowed knee to bend past the stop point with considerably less pain.

When the steri-pad was removed, there had been an unusual allergic reaction to the adhesive. The skin presented with a severe rash and there was seepage from the incision. This prevented the application of Kinesio Tape directly to the knee itself. Kinesio Tape was applied in a Basket Weave pattern a few days later when the incision cleared and dried.

Patient was walking without walker by third week and able to carry cane.

All other exercises were significantly easier to perform. Pain was reduced during each stretch from level 10 to 3. 7/11 visit orthopedic surgeon: Surgeon confirmed client ahead of schedule in recovery and reduction of swelling. Client attributes this to efficacy of Kinesio Tape.