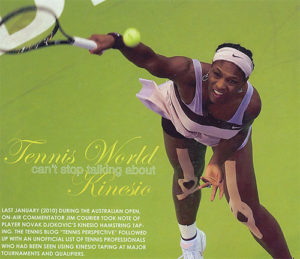 The blog noted “The tape has been very popular at this year’s season starting tournaments.” They listed the following:

The blog ran photographs of Monfils, Li and Henin with the tape, and noted players that had used it in previous years. “Rafa Nadal and Fernando Verdasco [used Kinesio Taping] for abdominal tears in [the 2009] US Open, Tommy Robredo [used it] for a knee problem inMadrid in 2008 and Fernando Gonzalez [has used it] for patella tendonitis.

“Back in 2007, The Age newspaper in Australia had looked into the reason for Serena Williams having Kinesio tape on her knees. They quoted Williams:

“Before the match, I had taping for prevention since I was feeling a little tight in both knees. I thought I was tighter in the right knee but then, once I had to increase my range of movement, the left knee got worse. I’ve had issues with my knees before, especially the left knee since that’s the one I had surgery on in 2003.”